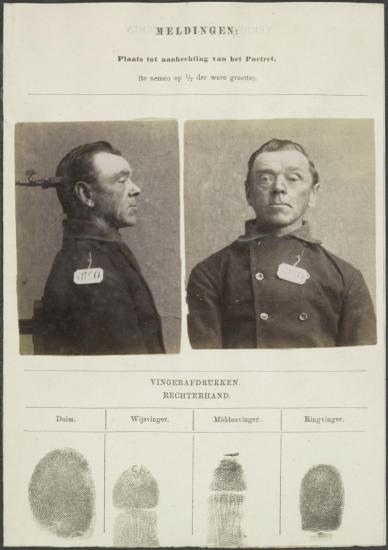 #  Picture of  JAN TEN WOLDE  , born on may 27th 1841 in the the small town of Steenwijk in the province of Overijssel in the country of the Netherlands .

Jan ten Wolde  was one of the brothers of my great-great-grandfather  PETER TEN WOLDE  , and Jan was the only one of his brothers who , to our knowledge at least , had ever been portrayed more than a hundred years ago , bút under somewhat awkward circumstances we may add ..........

These duo-pictures were taken in the last years of the 19th century , in a well-kwown place in the Netherlands : Veenhuizen , well-known for its .....prison ...
And yes , these two pictures were taken , hád to be taken , when , the rather unfortunate , Jan ten Wolde was taken in (may 18th 1896) , after having been arrested and convicted for vagrancy , not such a very serious crime , but yet serious enough to send him to jail for a while (for how long is not known to us)  -   and to be honest : it doesn't seem to have been the very first time that Jan had been arrested for vagrancy (his criminal record states that it was his fifth arrest already for that same 'crime' ....) .

What do we know about his life that could explain Jan's , let's call it , faux pas .....??
Well , we do know a couple of important things about his background :   Jan ten Wolde came to this life as the ninth child of  ALBERT TEN WOLDE  and  BREDANA  DE OUDE  ( these people were my great-great-great-grandparents) .
Like his younger brother Willem Dirk , Jan joined the KNIL (the former Royal Dutch Indonesian Army) as an infaterist , and , in the course of the 19th century , went to the Dutch Indies/Indonesia .
Jan's brother Willem Dirk sadly lost his life there on board of a hospital ship , near the coast of Sumatra , Atjeh , a province in the Indonesian archipelago where severe battle took place in that period of time .

Jan ten Wolde returned to his homeland , the Netherlands , alive , with a few minor injuries or scars , but possibly mentally much more severely damaged as a result of possible atrocities and misfortunes he had to experience , including the death of his brother , during his stay in Indonesia  -  nowadays one could possibly label his mental state of mind as 'post-traumatic war syndrom' , but who , in the 19th century ,  had ever heard of that phenomenon ....??

Back again in Holland , Jan earned his daily bread as a labourer , possibly still very much influenced by all the events that had taken place in his existence , and not really capable to find his way through life , now being back on native soil again .

And so Jan ten Wolde was arrested several times for vagrancy  and sent to jail , bút ........this , until now rather sad life story ,  still , 'against all odds...',  would get a somewhat happy end :  eventually Jan ten Wolde must haven found his way in life , since we know that at some point in time  he must have become a cook , must have settled in an other place , in the shady village of Beekbergen , in the province of Utrecht , and we also came to know that in this place Jan must have passed away in or around the year 1916 , at the , certainly for those days and also in consideration of his lifestyle (so to speak) , relatively high age of 75 , but , as could also be read in his death-certificate , he never ever seemed to have found a dear woman who had been willing to become his Mrs. ten Wolde ........ 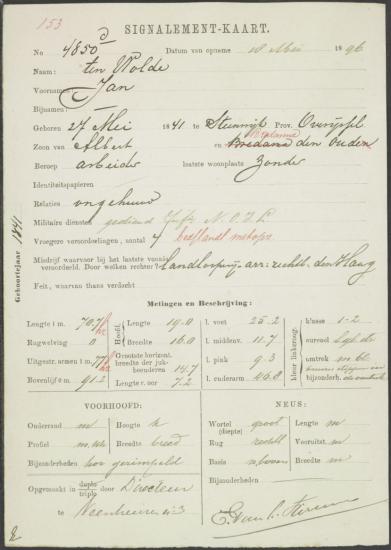